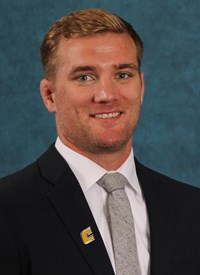 Kyle Ruschell is entering his fourth year as the head wrestling coach for the University of Tennessee at Chattanooga.  During his short tenure, the Mocs have held a 15-5 conference dual meet record and qualified eleven wrestlers for the NCAA Championships.  In his first season at the helm, Coach Ruschell led Chattanooga to a regular-season conference championship.  Most recently, Ruschell sent four athletes to the NCAA Championships and coached the Most Outstanding Wrestler of the Southern Conference tournament, Drew Nicholson.

Prior to taking over at Chattanooga, Ruschell spent eight seasons as an assistant coach at Wisconsin under the legendary Barry Davis. During his time in Madison, Ruschell coached fourteen All-Americans and three NCAA finalists (Tyler Graff, Isaac Jordan, Conner Medbery). Four times in his tenure, Wisconsin finished in the top 20 at the NCAA Tournament, including a 13th-place showing in 2017.  In that same year, the Badgers sent nine wrestlers to the NCAA Championships, marking the program’s highest number of qualifiers since 2007.

Athletically, Ruschell experienced plenty of success while wrestling at the Senior freestyle level. He competed in the World Team Trials four times, most recently in 2018.  In 2014, Ruschell earned a spot on the U.S. National Team by placing 3rd in Phase II of the World Team Trials at 70 kilograms.  His impressive run included wins over two-time NCAA champion Kellen Russell of Michigan and four-time All-American Frank Molinaro of Penn State.  After a three-year hiatus, Ruschell won the 2017 Pan American Championships at 74 kilograms, qualifying the weight for the World Championships.

In the fight to “Save Olympic Wrestling”, Ruschell was asked to be a representative for the sport at the Kentucky state capital as they passed a state bylaw to keep wrestling in the Olympics.

The Crittenden, Ky. native was a four-time NCAA championship qualifier for the Wisconsin Badgers, earning All-American honors twice at 149 lbs. The four-year letter winner served as team captain during his sophomore, junior, and senior seasons.  Ruschell is the only two-time All-American from Kentucky and the state’s highest placer in the NCAA Division I championships. At Ryle High School, Ruschell was a two-time state and four-time conference champion.  He was inducted into the Ryle High School Hall of Fame in 2011.  He and his wife, Allie, were married in June of 2017.