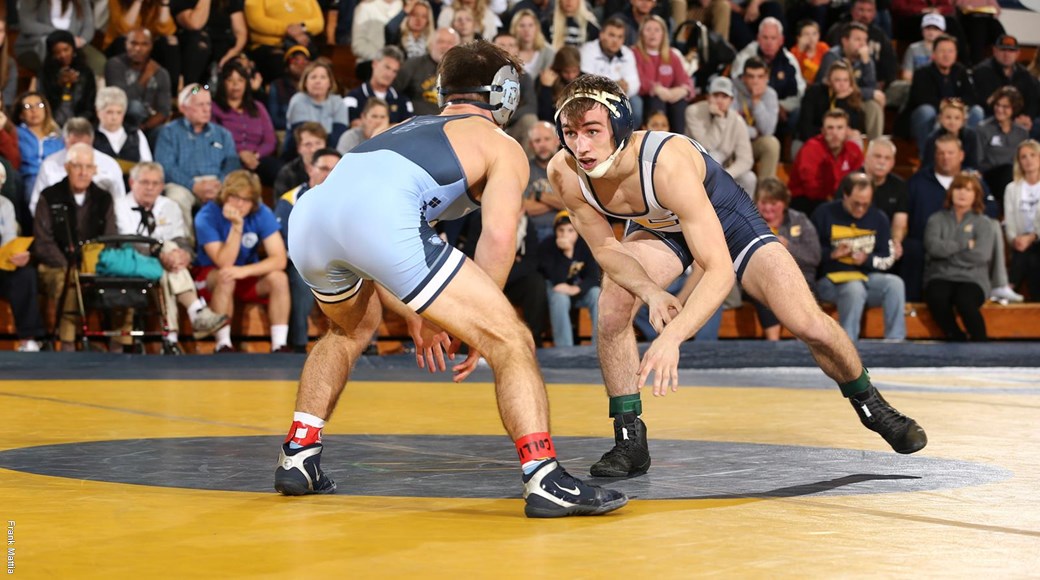 The University of Tennessee at Chattanooga wrestling team opened its dual meet season with a 23-10 loss to No. 21 North Carolina in Maclellan Gym today.  The Mocs battled up and down the lineup, and pulled off three individual wins against the Tar Heels.

Chattanooga actually ran out to a 10-0 lead, with all three wins coming at the top of the order.  Sophomore Fabian Gutierrez got it going with a major decision at 125.  The reigning SoCon Wrestler of the Week scored a 12-2 major decision over Joseph Heilmann to give the Mocs a 4-0 lead.

Junior Jake Huffine got the crowd into it with an 8-6 overtime win against James Szymanski. Szymanski scored the first takedown, but Huffine escaped and countered before the end of the opening period.

Szymanski scored again late in the third, but Huffine reversed to force the extra time.  Huffine then scored a takedown in overtime for the win.

“He does everything right,” stated head coach Kyle Ruschell, who made his dual meet coaching debut today.  “He is that type of kid that comes in and is ready to work.  He works hard and that shows on the mat.

“He gave up that first takedown and he got to his feet and was right back in.  That is exactly what we preach and we point to him every time now to have that same mentality.”

UTC’s other win came at 141 with junior Chris Debien scoring a 10-5 decision against Austin Headlee.  Headlee was up 3-1 in the second when Debien scored a takedown and four back points to take control of the match.

“He lost to that kid by six a week ago and came back and flipped the score,” commented Ruschell on Debien’s performance.  “He had a great week of practice.  He came in focused, knew who had to wrestle and what he needed to do.”

UNC took the final seven matches to win the dual, but the Mocs had some impressive performances against top competition.  UNC sent out ranked wrestlers at 149, 157, 184 and heavyweight.

“I am happy with the guys’ effort,” said Ruschell.  “We have been preaching that since Day 1, coming out there and getting ready to fight for a full seven minutes.  I think for the majority of our guys, they did that for the full seven minutes.”

Up next for the Mocs is the Wolfpack Open in Raleigh, N.C., next Sunday.  Chattanooga’s next home action is the Southern Scuffle, presented by Compound Clothing.  Tickets are on sale now on GoMocs.com.