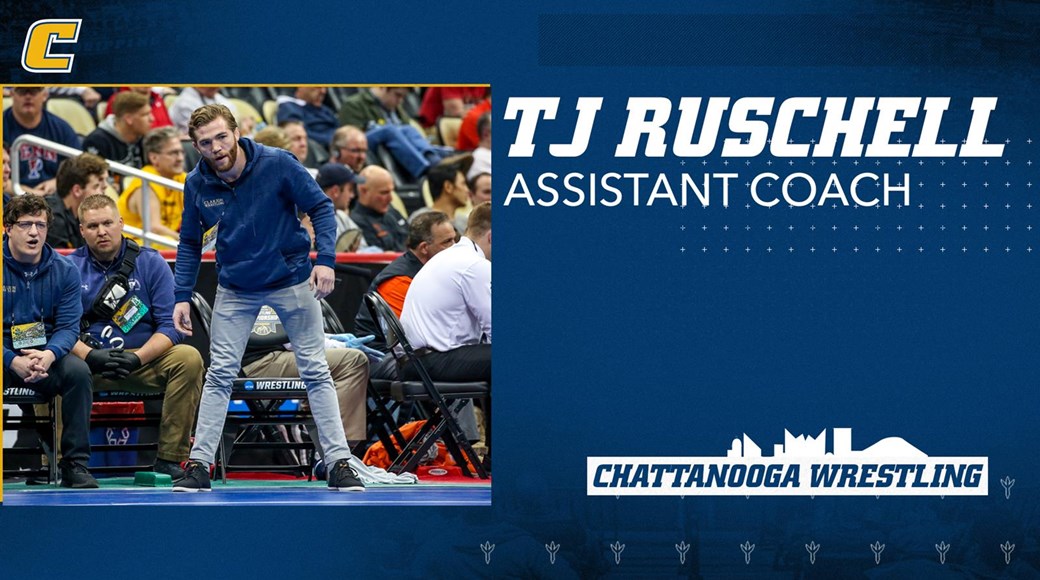 University of Tennessee at Chattanooga head wrestling coach Kyle Ruschell announced the hiring of former Clarion University assistant coach TJ Ruschell, today.  He replaces Hunter Gamble, who took a position outside of coaching after earning his MBA from the UTC Rollins College of Business this spring.

TJ is the younger brother of the Mocs second-year head coach.  He spent last season as a volunteer assistant at Clarion.  There he helped lead the Golden Eagles to a third place conference finish in the regular season.  TJ’s primary focus was the middleweight classes, which proved beneficial for Clarion as 165-pound senior Evan DeLong qualified for the NCAA Championships for the first time in his career.

“It’s obviously pretty special for me to be hiring my younger brother to be a part of my staff,” Ruschell said.  “However, the main reason I’m looking forward to him joining UTC Wrestling is the perspective he brings to our sport.  We’re very different in our approach as coaches and together I believe our guys will get a well-rounded experience that will help elevate us to the level we’re working towards.”

Prior to his time at Clarion, TJ served a brief stint as an assistant coach at Lindsey Wilson College (Ky.).  The team finished fifth at the 2018 NAIA Championships with five Blue Raiders earning All-American honors.  Ruschell worked closely with 149-pound national champion Cam Tessari, as well as other middleweight wrestlers during his time at Lindsey Wilson.

“I am very excited to join the UTC coaching staff and look forward to helping Kyle continue working towards his vision for the Mocs future,” said TJ.  “I enjoyed watching their fight last season and can’t wait to start working with these guys.  There is a ton of untapped potential in the area that I am eager to discover.  Chattanooga is a great city with amazing people, and I’m thrilled to be a part of it.  Go Mocs!”

Ruschell competed for the University of Wisconsin from 2012-2017.  During his tenure as a Badger he compiled a 54-52 overall record at the 149 and 157-pound weight classes.  Although his final season was shortened by a knee injury, TJ came back in December to reach as high as 15th in the FloWrestling rankings while posting a 16-11 overall record and a 5-3 dual meet record.  This earned him an at-large bid to the 2017 NCAA Championships in St. Louis.

TJ was a three-time Academic All-Big Ten Selection; as well as a National Wrestling Coaches Association (NWCA) Academic All-American in 2017.  Ruschell graduated from Wisconsin with a Bachelor of Science degree in Economics in 2016.  He also earned a Master’s degree in Educational Leadership and Policy Analysis from UW in 2018.

A native of Crittenden, Kentucky, Ruschell attended Ryle High School where he compiled a 219-21 career record – the best in school history –  and was a four-time state placer and four-time regional champion, winning a state championship his junior season.  These impressive credentials earned him an induction into the Ryle High School Athletic Hall of Fame this April.