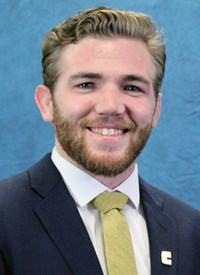 TJ Ruschell is the younger brother of the Mocs second-year head coach.  He spent last season as a volunteer assistant at Clarion, where he helped guide the Golden Eagles to a third-place conference finish in the regular season.  TJ’s primary focus was the middleweight classes, which proved beneficial for Clarion as 165-pound senior Evan DeLong qualified for the NCAA Championships for the first time in his career.

Prior to his time at Clarion, TJ served a brief stint as an assistant coach at Lindsey Wilson College (Ky.).  The team finished fifth at the 2018 NAIA Championships with five Blue Raiders earning All-American honors.  Ruschell worked closely with 149-pound national champion Cam Tessari, as well as other middleweight wrestlers during his time at Lindsey Wilson.

Ruschell competed for the University of Wisconsin from 2012-2017.  Although his final season was shortened by a knee injury, TJ came back in December to reach as high as 15thin the FloWrestling rankings while posting a 16-11 overall record and a 5-3 dual meet record.  This earned him an at-large bid to the 2017 NCAA Championships in St. Louis.

TJ was a three-time Academic All-Big Ten Selection; as well as a National Wrestling Coaches Association (NWCA) Academic All-American in 2017.  Ruschell graduated from Wisconsin with a Bachelor of Science degree in Economics in 2016.  He also earned a Master’s degree in Educational Leadership and Policy Analysis from UW in 2018.

A native of Crittenden, Kentucky, Ruschell attended Ryle High School where he compiled a 219-21 career record – the best in school history – and was a four-time state placer and four-time regional champion, winning a state championship his junior season.  These impressive credentials earned him an induction into the Ryle High School Athletic Hall of Fame this April.